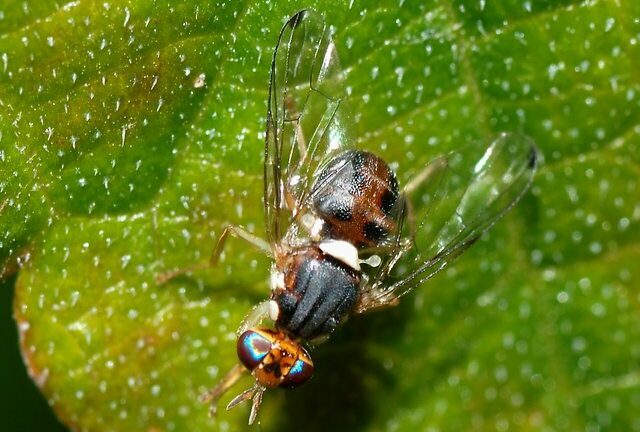 Bactrocera oleae, which is widespread throughout the Mediterranean, arrived in our country first on the coastal areas and then spread to the hilly interior, probably due to climate change favourable to its spread. In olive growing, it is considered the most pest capable of significantly affecting olive production. It is usually present from June until the last harvest in autumn.

WHERE IT IS ESTABLISHED

The olive fruit fly is present in all olive-growing areas of the world with the exception of Australia and South America. Very well established in the Mediterranean basin, we find it mainly in coastal areas or in more humid climates. In areas with higher altitudes, the climate does not favour its development, while where winter temperatures are milder, the pupae survive, thus prolonging the insect’s reproductive period.

The olive fruit fly has very similar features and size to other fruit flies, but its body does not have the usual bands and lines but rather spots with particularly colourful highlights. It has a wingspan of about 12 mm at the end of which a dark spot is barely perceptible, distinguishing it from other dipterans. Adult females have a yellowish head with two conspicuous circular spots under the antennae.

It is a carpophagous species: it feeds on fruit. Its larvae feed on the pulp of the drupe by digging tunnels.

The fly carries out 1 to 4-5 generations per year and this is highly dependent on temperatures. Coastal and/or southern areas: the warmer, wetter climate favours its development and up to 5 generations per year can be counted. Northern olive-growing areas: the adult males can resist even low temperatures and are therefore more long-lived: in these cases there can be up to three generations when spring rains and humidity create a favourable climate for the highly fertile females.

The damage that the olive fruit fly causes affects the health of the plant as well as olive production and, a very important consequence, oil production. The fly lays its eggs in the olives when they reach the size of a chickpea. The hatched larvae feed on the flesh of the fruit, spoiling it and causing it to drop early. This is one of the most incisive factors in compromising the quality of the oil, which is more acidic and oxidises more easily. The tunnels that the larvae dig by feeding on the olive pulp also sometimes cause a higher incidence of olive disease problems as they create a favourable environment for the proliferation of fungi and bacteria that accelerate the decomposition of the olive pulp.
Problems of this kind are not so much linked to first-generation (spring) oil fly attacks, but rather to cases in which the fly makes several generations from summer to autumn (a factor closely linked to the plot’s microclimate and seasonal weather). They are, therefore, considered an indirect cause of the deterioration of oil quality. The deterioration of the drupe, in fact, is mainly due to the action of fungi and bacteria that penetrate through the larvae’s exit hole, accelerated under conditions of high humidity.

The frequency and intensity of olive fly infestations are definitely linked to climatic trends and to a limited extent to the presence of natural antagonists. The milder winters brought about by climate change also seem to have affected the biology of the fly, so in spring we notice a greater presence of the fly than in previous years. It is in fact the milder winters that favour a longer breeding season for the fly (with a consequent increase in the spring population). Conversely, however, higher summer temperatures contribute to increased larval mortality.
The strategy that proves to be most successful is the two-step strategy:
– curative larvicidal action
– adulticidal control with food traps

This page was written and edited by Maura Rizzo